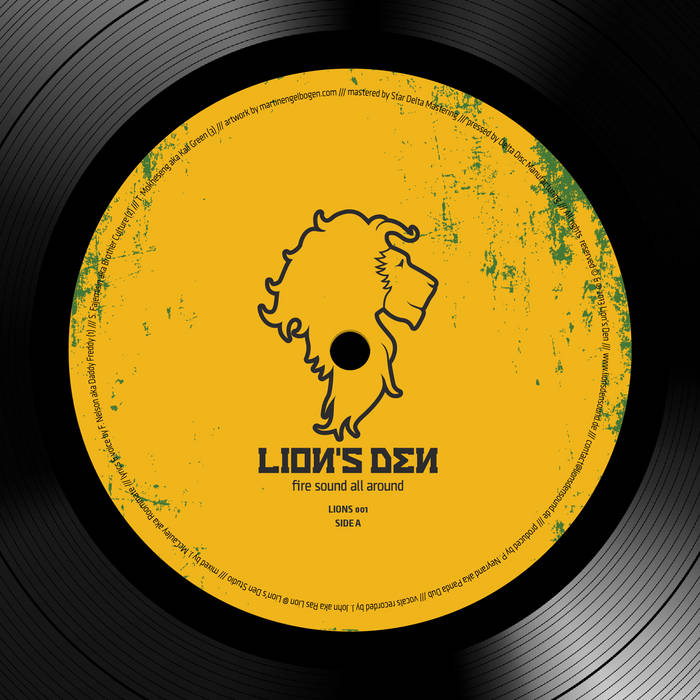 For the first release Lion's Den has teamed up with the heavyweight steppaz producer Panda Dub outta Lyon, France, to deliver finest in conscious dub for all music lovers. A driving riddim with three different vocal and a special heavy steppaz dub cut, mixed by Roommate outta San Francisco, USA, and finally transferred to 1/2inch Tape for extra analogue warmth, mastered with care and pressed on high quality limited and hand-numbered 180g vinyl by Star Delta / Delta Disc, UK - of course also digikally available.
The first track coming "Hot A Di Press" is a soundbwoy anthem style combination with the legendary Jamaica-born Daddy Freddy outta Nottingham, UK, on the microphone - a dedication to the sound system culture, a musical murderation. The second tune features the "Original Rasta MC" Brother Culture outta Brixton, UK, with some oldstyle "Dance Teng" lyrics from 1985 and the third vocal is from Lesotho-born Kali Green outta Berlin, Germany, chanting with full power and dedication - calling out for some "Hard Working" and conscious living instead of hypocritical dealings. Last but not least, Panda Dub himself cut a heavy steppaz dub version, ready to nice up every sound system session from the north to the south and from the east to the west.
Message music for the people…

Lion's Den will set the fire ablaze with this debut, but from there on it will keep on burning and many further projects are already lined up - so watch out.

cktrl talks about heartbreak and his new record 'Robyn'